Chicago In Solidarity with Standing Rock

The Chicago Socialist Party, and YPSL stand strongly in support of the united nations of Native American peoples in Cannon Ball, North Dakota bravely standing against, and at times, physically disrupting the construction of the Dakota Access Pipeline which seeks to snake its way across a large part of the Midwest and deliver oil to Illinois, which without a doubt spells danger for the environment and the people dependent on it.

From late august until this date, the eyes of many on the left and activists of all kinds have been on North Dakota and the situation unfolding. The unheard cries of justice and sovereignty of the Standing Rock Sioux Tribe have resonated with many of us, especially myself; a member of not only the Chicago Socialist Party and YPSL, but a person of Indigenous descent. It’s no secret that indigenous people of the Americas are routinely ignored, mistreated, and harmed in all manner of ways as a continuation of the genocide initiated by European forces, but it has never come without a fight from those effected. The latest acts of indigenous resistance come after a long legal battle to protect the Missouri river and the environment surrounding the sovereign territory of the Standing Rock Sioux Tribe due to the fact that not only does construction cause damage to the sacred area, but an almost certain likelihood that an oil spill will occur as it has in many other places already. Of course when it comes to fossil fuels and the wealth they generate for the money hungry capitalist conglomerates, the environmental toll doesn’t matter and has never mattered. What does matter is the result of all of the protests, stoppages and direct action; whether it will have a profound effect and halt construction for good as it has done in the past with the Keystone XL pipeline. One can certainly hope, but here at the CSP we will certainly do our best to aid in the fight, as was evidenced by our participation in a solidarity rally.

David Bender from the AIC speaking

Members of the American Indian Center, Black Lives Matter Chicago, and various other groups with Indigenous American people organized a solidarity rally Friday, September 9th to voice support for all the great people Standing with Standing Rock. Members of the CSP and YPSL were also there, albeit not as organizers, but supporters. The rally started off with a prayer and then proceeded to have speakers from different organizations which helped organize the action, some footage of these speakers will soon be uploaded to our YouTube for everyone to listen to. Once the speeches were over, unbeknownst to many in the crowd, the organizers began a march towards the local office of the Army Corps of Engineers. The march took many twist and turns, quite possibly to spread the message of solidarity to as many corners of downtown as possible. Rain fell here and there, but failed to deter anyone. Hundreds, if not more than thousand people marched through downtown chanting “Water Is Life” and “Stand Up, Fight Back”, it was a powerful scene to put it lightly. Once at the Army Corps of Engineers’ office, within eyesight and walking distance of the Board of Trade, a letter was delivered. From there the march made some more twists and turns and ended near the Sears tower.

Overall it was a very inspiring display of solidarity and support coming from many people who are for one reason or another not able to make it to North Dakota, or simply want to make it known that the people of Chicago defiantly stand in support of the Lakota people and their calls for environmental justice, sovereignty, and peace. 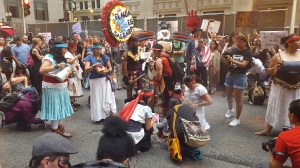 On a very personal level, it was profoundly joyful to not only be surrounded by fellow indigenous people, but party comrades and supporters of a cause that may very well have gone completely ignored had it not been for the tireless work of the water protectors of Standing Rock. Indigenous people and our issues often go without desperately needed attention, for the case to be different in this instance is something truly special. However, the fight at Standing Rock is not over, despite some hopeful news such as the temporary halt. There is much work to be done; and even if the fight is victorious for the people at the reservation, there will still be other fights to overcome, systemic and immediate. The work to decolonize, resist, and thrive will never end so long as white supremacy, willful ignorance, and capitalism exist. It is not merely the job of people of color to work on the destruction of these things; they are to be eliminated though the collective effort of everyone.