CSP and YPSL Go HARD on Gentrification and Displacement. A Productive Week In Review 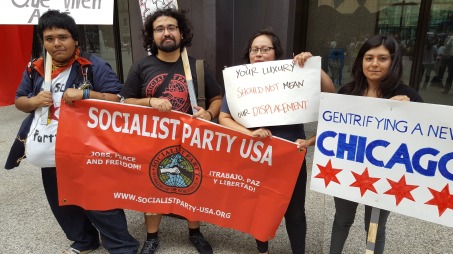 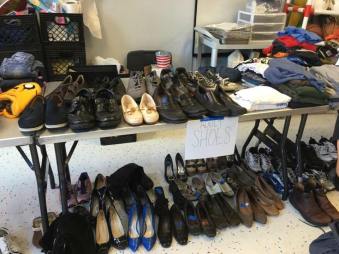 The week of September 18th through 24th tested the small, but dedicated numbers of the CSP and Young People’s Socialist League with emergency  volunteer work, two co-organized events, (including a rally), and a meeting. Despite the last minute addition of organizing a donation drive following 7 cases of arson in Pilsen that displaced 25 people, we were able to both raise supplies and housing for some of those affected, putting our principles of direct action to work.

The work began with CSP, YPSL members and sympathetic comrades (including a visiting comrade from the Kentucky Workers League) volunteering in a neighborhood-wide effort after several families were displaced by arson in Pilsen two days before. Volunteering consisted of sorting and organizing clothes, food, furniture and household goods donated by people from across the city. With much of our work and talk of gentrification taking place in Pilsen, CSP Chair Miguel stepped up to the plate almost immediately and helped in organizing the drive and volunteer work with other organizations such as Pilsen Alliance, and Pilsen United. The work continued throughout the week at the local YMCA even with our Renters Day of Action preparations planned and organized, and volunteer work is still continuing as the CSP, Pilsen United and Pilsen Alliance work towards distributing the remaining surplus clothing and supplies to local shelters and community centers.

On Sunday a small and brief members meeting took place with a few things discussed, a well needed break from the volunteer work. However on Monday the 19th , the CSP held a workshop on wage theft, gentrification, worker’s rights, and the connection between all three at the Blessed Dorothy Day Mission on Central Park and Cermak. The workshop didn’t go exactly as planned, with an unforeseen injury of one of the presenters and a less than expected turnout. Despite this turn of events, contacts were made with those who showed up for future actions. 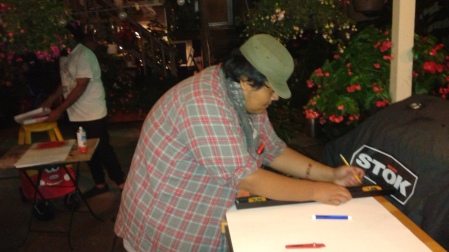 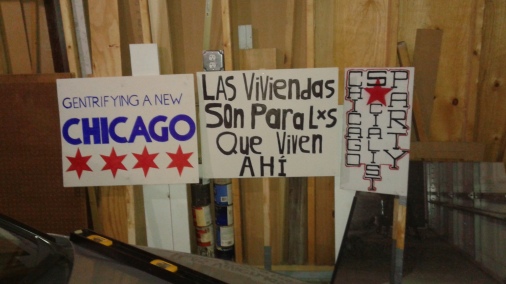 Wednesday the 21st proved to be a trial in itself. After some sorting by CSP/YPSL members and a volunteer at the YMCA,  signs had to be made for the National Renter’s Day of Action, which took much longer than anticipated – with the help of a local comrade. On Thursday, at 3:30 the CSP gathered at the Zocalo on Blue Island and 18th St. in Pilsen and were joined by two upset community members willing to protest displacement and neo-colonialism in Little Village and Pilsen before leaving to meet up at the rally over in Daley Plaza. We arrived a little late, but just in time to hear testimonials from those most affected by evictions, foreclosures and development in Chicago. We met up with another CSP member and participated in a protest around the block outside of the Courthouse along with other organizing groups such as the Autonomous Tenants Union, SOMOS Logan Square,  Chicago Housing Initiative, Jane Addams Senior Caucus, Northwestside Housing Center, Metropolitan Tenants Organization, ONE Northside and the Lawyers’ Committee for Better Housing and fellow Chicagoans. All in all it was a busy, yet satisfying week for the Chicago Socialist Party, with many more to come as we continue our direct action and organizing campaigns around Tenant Union and Community Land Trust organization as well as gentrification and wage theft.